On Saturday, November 11, we take the time to celebrate those who have sacrificed so much for our country.

Alzheimer’s Family Center is proud to partner with the Veterans Administration to provide financial aid for veterans and their families. With some of our patients formerly members of the armed forces, we recognize the importance of honoring Veterans Day.

Our veteran patients have been in a plethora of positions ranging from soldiers, pilots, and navy officers. Here are just two of our valued patients who have served in one way or another.

Sidney George Warnier served in the U.S. Air Force for 20 years as a loadmaster. He was tasked with the safe loading, transport, and unloading of aerial cargoes, making sure that all troops and supplies were accounted for, weighed and scoured properly.

He served in the Vietnam War for four years where he accumulated multiple awards for his courageous flying. He received the Distinguished Flying Cross, one of the highest military decorations, for a mission during which he flew for 72 hours straight, delivering goods and supplies to the troops. 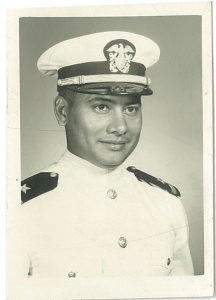 Joe Ripley served in the Army and Navy for 20 years. He spent that time traveling to different parts of the world and learning different languages and cultures. His favorite station was in Japan, where he got to experience its vibrant language and culture.  While stationed in Houston, Texas, he met his wife, Rose, who travel alongside him for his different contracts. After he left the navy, they ran their own business for 15 years as interpreters in the medical field for Spanish-speaking people.

These men are just two of our patients who have demonstrated courage in the armed forces. AFC salutes and pays respect to everyone who has fought in the name of our country.