James Ford may have been born in Little Rock, Arkansas, but he’s a Chicago boy at heart. After moving to the Windy City, James enlisted in the military at the ripe age of 15 to keep out of trouble. From there, he spent 28 years in the field, going through multiple branches from the Navy to the marines and fighting in the Korean and Vietnam War. 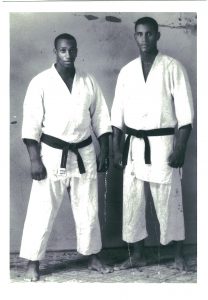 While in the military, Ford was frequently stationed in Okinawa, Japan. It was there that he picked up martial arts and worked his way up to a black belt. When he returned home, he started teaching karate to the community on a volunteer basis. “My dad was very involved with the community center,” his daughter, Janice Ford, said. “He wanted to give young boys an after-school activity to stay out of trouble. Alongside giving karate lessons, he was also a youth soccer coach.”

When Ford came home from the military, he worked in a variety of jobs such as computer tech and the electric company. He eventually went into law enforcement, starting as a correctional officer and retiring as a parole officer after 20 years on the force. But after working for so long, Ford eventually got bored and found a job as a security guard.

Unfortunately, it was during his time as a security guard that Janice and her family started to notice signs of memory loss in Ford. “His job was nice about it,” Janice said. “They called my mom into the office and said they thought something was wrong. They didn’t want to fire him because he wasn’t doing anything wrong, but they recommended that he get checked out by a doctor. That was when we found out that he was in the early stages of dementia.”

Janice discovered Alzheimer’s Family Center (AFC) through family friends. “Whenever we told our friends about my dad’s restlessness, they mentioned that their neighbor had Alzheimer’s and his wife would send him to this daycare facility. I had to know what this place was. My father doesn’t sleep at night, so I was thinking that having activity during the day would help him feel more tired in the evening when it was time to go to bed.”

Ford has been at AFC since May 2017. While he was a little hesitant to attend at first, he has now been frequently asking to go. “My dad only attends Monday through Thursday and stays at home on Friday. But my mom told me that he asked why he wasn’t going to ‘school’ on Fridays. He’s all dressed and ready to go, and she has to convince him to wait until Monday!”