Dementia can change a person’s personality and their behavior. They may act very differently than they used to, and say or do things that they would not have normally done. Family and friends may feel very uncomfortable with these changes, and be confused about why the person is behaving this way.

Often times, these behaviors are due to changes in the brain. The brain has over 100 billion neurons, which are cells that transmit information and messages to the rest of the body through complex networks. Dementia disrupts communication between neurons, causing the neurons to become damaged and die. As neurons in the brain are lost, the behaviors often reflect the parts of the brain that are losing neurons.

What parts of the brain are affected by dementia?

The parts of the 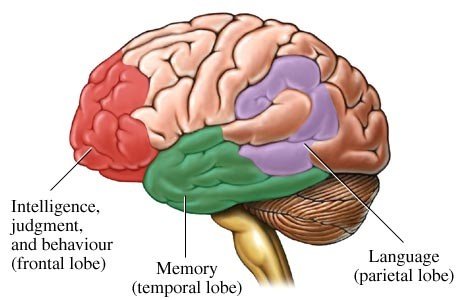 brain most commonly affected by dementia include the frontal lobe, the temporal lobe, and the parietal lobe.

Some examples of changes in personality and behavior include:

Fred was always proper and faithful to his wife, but lately has been making sexual gestures and saying explicit things to the nurses who care for him.

Jeannie has been a gentle mother and grandmother, but has become aggressive towards others and hits and kicks at her caregivers when they attempt to help her.

Sally was a reserved and conservative homemaker, her behavior has become very impulsive and she frequently approaches strangers and hugs them, laughs and talks loudly, and sometimes shoplifts from stores or undresses in public.

Patients with dementia may lose the ability to express themselves, and their behavior may be a means of communicating. Sometimes a change in behavior can signify another problem. A person who is struggling in their environment may become frustrated that they cannot follow a telephone conversation, follow a recipe, or balance their checkbook. The environment may be too noisy or distracting, leading to increased irritation and agitation. The person may not be able to articulate what is bothering them.

Here are some possible scenarios:

Undressing: May need to use the bathroom. May be too warm or clothes are uncomfortable.

Hitting, Kicking, or Biting: May have pain or discomfort, may be attempting to communicate pain or upset. May have a perceived threat or invasion into personal space, such as when personal care is attempted. May have frustration due to restriction, loss of control, and limited choices.

Running Away: May be due to anxiety, or may have a plan or purpose of something they believe they need to do like “I need to go to work!”.

Sexual Behaviors: May misunderstand the context or relationship. May misinterpret the purpose of personal care. May have a longing for intimacy.

Touching Face or Body Part: May have pain or discomfort. May have a dental issue.

How to cope with behavioral changes due to dementia?

This post was written by Cheryl Alvarez, PsyD, Director of Outpatient Behavioral Services at Mind & Memory Program at Mission Hospital.
Dr. Cheryl Alvarez is a licensed Clinical Psychologist, and Program Director at Mind & Memory Program, which was launched in partnership with Mission Hospital and is the first of its kind in the nation. She holds a Master’s and Doctoral degree in Clinical Psychology from the American School of Professional Psychology at Argosy University. Dr. Alvarez is passionate about working with the patients and caregivers to improve their health and increase their quality of life.